As posted in the Wall Street Journal

Many small firms that own commercial property are facing big trouble

The problem is simple: Banks typically re-evaluate commercial mortgages every five to 10 years. At that point, they can renew the loans, or ask business owners to pay them off.

These days, lenders are a lot less willing to extend loans that don’t seem like good bets—and it’s tough for businesses to look creditworthy after years of slumped sales and exhausted savings. “So many small businesses have lost their reserves during the recession,” says Brent Case, president of Coldwell Banker Commercial Atlantic International Inc., in Charleston, S.C. “They don’t have that chunk of cash that banks want as a buffer.”

That leaves many small-business owners scrambling to find a lender that will cover their loan—or facing the loss of their property through foreclosure.

For an idea of the scope the problem, consider this: Some $276.2 billion of nonresidential commercial-property loans are expected to come due in 2013. That’s higher than any prior year, according to Trepp LLC, a commercial-mortgage research firm in New York. 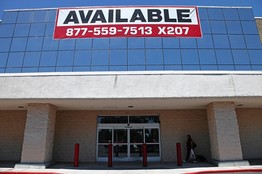 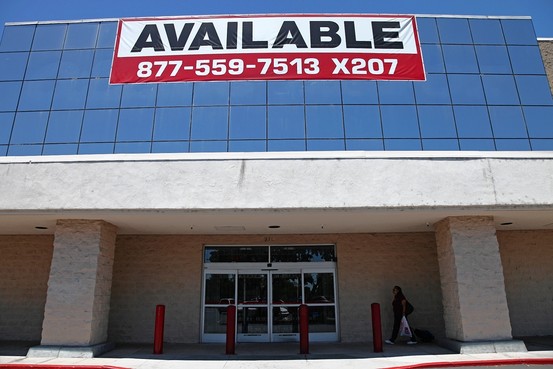 Associated PressA commercial property for rent in Stockton, Calif., a city that has been plagued by foreclosures

Many of these loans were made leading up to the financial collapse in 2008, when property values were high and business owners could depend on steady income to repay the loan. In other cases, the loans came due in the depths of the financial crisis, but banks were willing to give businesses extensions—essentially pushing the question of refinancing to a later date. Some analysts estimate as many as 60% of commercial real-estate loans that came due were extended during this period.

Now the extension periods have been coming to an end. Borrowers are again confronting big balloon payments they can’t make—and banks are more willing to foreclose. They’re better capitalized than they’ve been in years and “are in a position to take a hit” on a loan, says Dan Fasulo, managing director of Real Capital Analytics Inc., a commercial real-estate research firm in New York.

Bud Matthews of Chapel Hill, N.C., faced a five-year balloon payment of $240,000 in 2006 and had no trouble refinancing with SunTrust Banks Inc. STI +1.48% But when the second balloon payment came due in June 2011, he couldn’t find a bank to refinance the roughly $200,000 still outstanding. “We went to other banks, and they’d say, ‘You are a good bet, but not good enough,’ ” says the 61-year-old, who occupies a commercial office for his 15-person construction and appliance-repair firm.

After much negotiating, the bank extended the loan through August 2012, but when it came due, Mr. Matthews couldn’t pay the outstanding amount in full. The bank didn’t want to refinance and started the foreclosure process.

Days before Mr. Matthews’s property was scheduled to be auctioned in February, Harrington Bank, a local lender, agreed to assume the loan.

Hugh Suhr, vice president of corporate communications for SunTrust, says, “While we are not at liberty to discuss specific client relationships, we make every effort to work with clients on a case-by-case basis…in order to reach an outcome that best addresses the needs of all involved parties.”

Given the number of loans coming due this year, and banks taking a critical eye to loan applications, it seems the problems will drag out for a number of years. As of mid-2012, about one in three loans coming due through 2016 was under water, meaning the property is worth less than what’s owed, according to one estimate from Trepp.

“We can look out three to four years and know with certainty that a super amount of debt will come due that can’t be dealt with in an ordinary way,” says Phil Jemmett, chief executive at Breakwater Equity Partners, a San Diego consultancy and investment firm that specializes in troubled commercial real estate. “Roughly 20,000 small commercial properties…are facing distress in the next 12 months. We expect similar numbers in the next three years, and then it will taper off after 2016.”

The incoming debt could trigger a “wave of foreclosures,” says Tom Watson, CEO of JPB Commercial Real Estate Advisors LLC, a brokerage and real-estate consulting firm in Miramar Beach, Fla. The size of that wave, he says, will depend on whether the economy continues to improve. If it does, banks will steadily agree to refinance loans and offset the number of foreclosures that would have otherwise transpired.

To be sure, commercial real-estate analysts largely agree that the commercial real-estate market won’t experience a full-on collapse. One January report found that 60% of $399 billion in troubled commercial real-estate assets tracked since 2008 have been bought by a third-party investor or refinanced with a lender. But the report, from Real Capital Analytics, evaluates properties valued at greater than $2.5 million. The smallest businesses may have the longest road to normalcy. Small properties “are much less attractive to the banks, especially larger banks,” says Matthew Anderson, managing director at Trepp.

In January 2008, the Spiliadis family, Stelios, Pauline and their son, Dimitris, received a $5.06 million loan from 1st Mariner Bank to build the Inn at the Black Olive. The property narrowly escaped a foreclosure auction late last month when the business filed for bankruptcy—a legal maneuver that prevented the auction from going forward.

The Black Olive, which touts environmentally friendly features including solar panels, geothermal wells and recycled wood furniture, was under construction during the depths of the recession. After construction, the elder Mr. Spiliadis, 74, applied for the loan to roll into a 20-year mortgage with balloon payments every three years.

But the inn, which opened in March 2011, wasn’t a good bet for the bank. The property value had plummeted, and cash flow was tight. Mr. Spiliadis asked the state of Maryland to provide a $1.5 million loan guarantee, but it never materialized. 1st Mariner, which declined to comment, didn’t refinance the debt and Mr. Spiliadis stopped making monthly interest payments.

Now in Chapter 7, the business is bringing in enough sales to sustain operations, says Mr. Spiliadis, but the family is not in the clear—they have until June to find an investor. If no investor steps up, the business will likely be on the auction block once again.