From the WSJ—- You can never give up and need to learn from the past,

Ian Bruce Eichner, a developer whose high-profile problems became symbols of the last two real-estate busts, is in final stages of a deal to buy a condominium development site near Manhattan’s Flatiron Building. 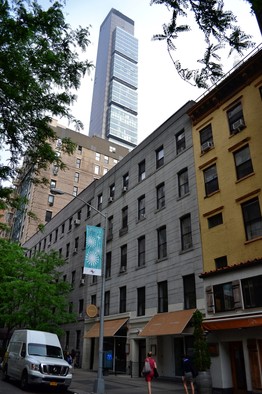 Looking to mount his latest comeback, Mr. Eichner is preparing to spend more than $100 million to buy the site as well as air rights that would enable him to build a nearly 800-foot tower with more than 90 units, according to real-estate executives briefed on the project. The slim, glass condo tower he is planning, designed by architecture firm Kohn Pedersen Fox Associates, would be the tallest building between the Empire State Building and downtown.

Similar to many developers moving ahead with new condo projects recently, Mr. Eichner is targeting the upper end of the market, real-estate executives said. Similar to others, he has been emboldened by the high prices that are being fetched these days—more than $3,000 a square foot in Greenwich Village and more than $5,000 a square foot for some units by Central Park.

A spokesman for Mr. Eichner declined to comment. He is hoping to complete the purchase of the site and air rights in the next few weeks, the executives said. The site is owned by One Hand Realty LLC, while the air rights are from a variety of properties nearby. One Hand couldn’t be reached for comment.

The tower, on East 22nd St. between Broadway and Park Avenue South, would be only 50 feet wide at the base but would expand like a slender champagne flute and be wider at the top, a rendering reviewed by The Wall Street Journal shows.

A slim, charismatic former Brooklyn, N.Y., prosecutor, Mr. Eichner switched to real estate and made it into the big time in the early 1990s with the development of CitySpire and an office tower at 1540 Broadway. Both projects ran into financial problems during the commercial real-estate crash that hit the U.S. soon after they were completed, and he surrendered them to creditors.

Mr. Eichner made a comeback with a number of successful projects and embarked on his largest-ever project in the recent boom: the giant Cosmopolitan Resort Casino hotel and casino on the Las Vegas Strip. That project, which eventually cost nearly $4 billion, ran into trouble when it was about one-third completed. It eventually was taken over by its lender, Deutsche Bank DBK.XE -2.75% AG.

In recent years, he has been looking to start his third act as a developer. In New York, he tried unsuccessfully to buy the One Madison Park condo tower, a project overlooking Madison Square Park, which stalled in the downturn.

He also is trying to build in Harlem, N.Y. Earlier this spring, he reached a deal withVornado Realty Trust VNO +0.42% to pay $65 million for a large site on East 125th St., according to real-estate executives familiar with the deal. He plans a large apartment project on the site, where Vornado wanted to build an office tower.

To move forward on the condo tower, Mr. Eichner would need to line up financing and close on the purchase of the site.

JOIN THE DISCUSSION5 Comments, add yours